Dive in, or plan it out? Painting pottery (Part 1)

Yesterday my pal, Rachel, and I headed to the "froh + bunter" workshop in Munich to get painting on pottery. Rachel and I have only known each other a few weeks, but a few hours in the workshop and we discovered a fair bit more about each other's personalities.  Whereas Rachel dove straight in, creating a beautiful pattern of swirls and dots on a cake platter... 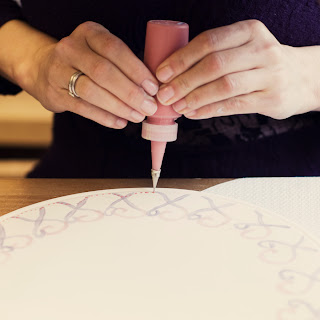 ...I took a more planned approach.  OK, perhaps I was procrastinating and scared of making a mark, but I just like to plan a bit more. You can't knock 10 years as a lawyer out of me that quickly!


Taking inspiration from the textile design course I attended earlier this year, I picked out from my sketchbook one of my circle designs that I had developed for that course and then plotted out a design for my chosen piece of pottery - a rectangular serving dish. 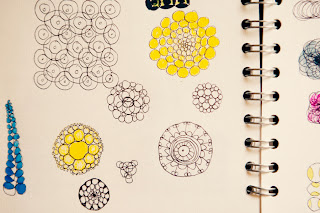 After much goading from Rachel, I eventually got to work on my piece, using a special pencil (I wouldn't have been able to get the fine lines I wanted with paint). 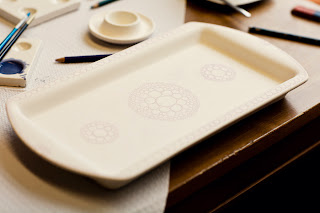 Not wanting to miss out on the painting action, I also attempted a scandi style classic blue and white striped pattern on an egg cup. 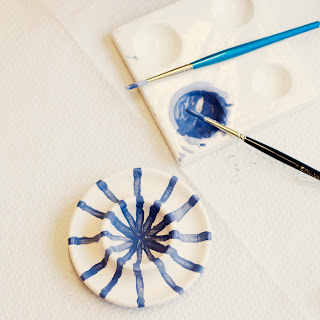 We have to wait until next week to pick up the pieces once they've been fired. I can't wait to see them and will be sure to post them on the blog. Until then, here's a couple of pictures of us in action. 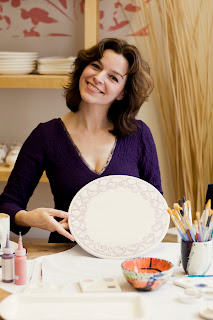 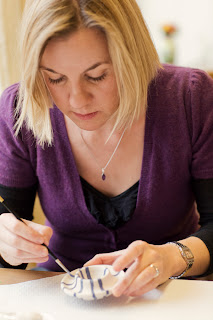 What's your approach to art/design? Do you plan it all out in advance, or just dive in and follow your instincts?
Posted by Lia Edwards at 8:13 AM 2 comments:

I love finding art in nature.  I “collected” these examples of nature’s own fine art today. There were just there on the wall down the road.  I thought they looked like streams of paper-cut hearts. 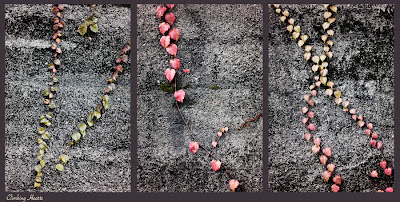 Next time you're walking down the street, have a look around you, up above, and below your feet and see what art you can find.
Posted by Lia Edwards at 9:56 AM No comments:

Email ThisBlogThis!Share to TwitterShare to FacebookShare to Pinterest
Labels: Photography

I have been begging my mother for years to show me the traditional method for baking Irish soda bread, so when she visited me in Munich recently, we got baking. I was amazed to discover it’s really just like making a massive scone! The recipe is below. 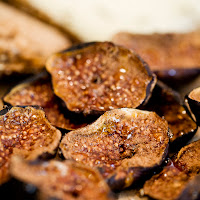 The roasted figs part of this recipe is more of a suggestion for ingredient pairing than an actual recipe. Simply half your figs, dust with a little cinnamon if you feel so inclined and slow roast them in the oven either at its lowest setting overnight or at 100C for 2-3 hours until they start to ooze. Serve with the soda bread (see below), some salty cheese such as manchego or pecorino and a drizzle of agave nectar (or honey). 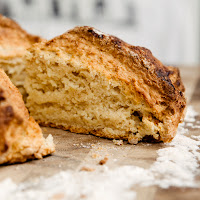 To make the soda bread, you will need:
500g plain or half plain half wholemeal flour (I used spelt, but wheat is what is traditionally used)
1tsp salt
1tbs baking powder
40g butter, chopped
400ml buttermilk or ordinary milk soured with a little lemon juice

1.  Heat the oven to 200C and dust a baking tray with a little flour.
2.  Sift the flour, salt and baking powder into a large mixing bowl.
3.  Rub in the butter until the mixture resembles breadcrumbs.
4.  Make a well in the centre and slowly pour in the buttermilk, stirring in with a wooden spoon. Don’t mix too much, just the lightest touch will do the job. You should gradually form a dough (use your hands at this stage), which should be soft, but not too sticky (add more flour if it is or more milk if it’s too dry).
5.  Put the rounded ball of dough onto the floured baking tray and flatten just a little. It should be roughly 8-10cm deep. Slash a cross in the dough with a sharp knife and dab a little of the buttermilk over the surface.
6. Bake for around 40 minutes. The bottom should sound hollow when tapped. Let cool (a little at least) and serve with some cheese and the deliciously sticky roasted figs.
Posted by Lia Edwards at 4:10 AM 3 comments:

Email ThisBlogThis!Share to TwitterShare to FacebookShare to Pinterest
Labels: Food

This is an illustration I did at the weekend inspired by the lyrics to the Faure song "Les berceaux" (right click on the link and open in a new window to hear the song). I've been playing the piano accompaniment to this hauntingly beautiful French song for a singer friend. The lyrics are all about the sailors going off to sea, but being held back by the rocking of the cradles of their children back at shore. The music conveys not only the rocking of both the cradles and the boats on the waves but also the sadness of the reality that the sailors may not return home. So I've tried to capture this in the illustration. 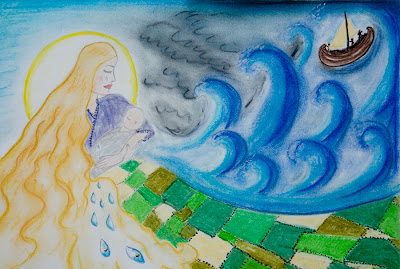 I started off with a pencil drawing of the composition I had in mind. Although the song refers to cradles, I interpreted this as being cradled in a mother's arms, as I thought this worked better visually. I wanted all the components to blend in to each other, so the tears reflect the waves, the waves mirror the locks of hair and the skirt becomes the landscape. Once I was happy with the composition, I tested out a few of the pastels on a separate page to get the a colour combination I was happy with, then coloured in the pencil-drawn picture.

This was the first time I have used pastels since school but they were surprisingly quick to work with and I love the way they blend so easily and provide a really soft feel to an image, although your hands do end up pretty filthy! The sharper details I did in coloured pencil.

These are the lyrics, including an English translation: 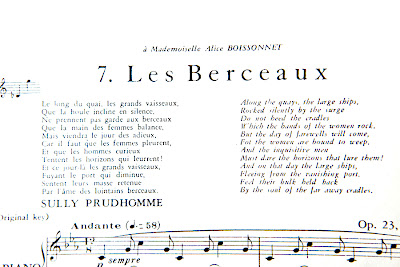 Posted by Lia Edwards at 4:16 AM No comments:

Here’s a variation on my guilt-free banana loaf, this time with apple puree, cinnamon and topped with slices of ripe pears.  As with the banana loaf, there’s no sugar or butter and I use spelt flour as an easily digestible alternative to the ubiquitous wheat flour. You could also make this completely pear-themed by substituting the apple puree with pear puree, or add some texture with chopped up walnuts. 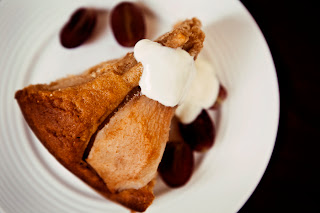 1. Preheat oven to 180C/350F (or if your oven is fan forced160C/325F) and grease a round cake tin
2. Mix the apple puree, olive oil, agave nectar, egg and vanilla extract in a big mixing bowl.
3. Add the baking powder and mix in the flour last.
4. Pour into the prepared cake tin and arrange the pears on the top.
5. Bake in the oven for around 50 minutes until golden on top and a knife comes out clean.
6. Serve however you fancy - I paired it with a spoonful of yoghurt and some red grapes.
Posted by Lia Edwards at 8:01 AM No comments:

Email ThisBlogThis!Share to TwitterShare to FacebookShare to Pinterest
Labels: Food

The other day, the DHL man arrived with a big package. Normally, as I am the only person in my apartment building during the day, I am the caretaker for packages for everyone else. So I was pleasantly surprised to discover this was actually for me.  I opened it to find a big file of the course materials from the Open College of the Arts. Wahoo! How exciting! These were the materials for the illustration course I will be doing over the next year. OK, so maybe some people wouldn't find a stack of course materials that exciting. But here's the thing. My name is Lia and... I am addicted to courses. 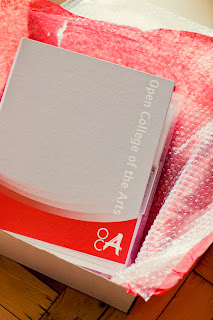 Actually, I like to think of it more as been addicted to learning.  For me, there is nothing worse than feeling I am at a standstill, not learning or moving forward with something. I just can’t get enough of learning new things.  When I first got into photography, I did a few courses. And with each one, I always felt I moved on another giant stride. Then, having had a little taste of fashion photography, I took an evening course in fashion illustration, which then led me to a weekend dress-making course, a week long textile design course at Central St Martins and now illustration. Hopefully this will all come together in some grand new career plan, but for the moment, I am just going to enjoy the learning process and see where it takes me.

Obviously one of the great things about taking on a course to learn a new creative skill is the techniques and tips you pick up from your tutor. But the other wonderful thing is the other people you meet on that course, who can inspire you and, in many cases, may become life-long friends with whom you share that particular interest.

So I encourage you to check out what you local community or arts college is offering, see what might be fun and sign up. It doesn’t have to have any career-orientated goal. It’s ok just to pick up a new hobby and make some new friends. It might be a one-time only thing that you do just for fun (like the time I took a tango class) or it might even be something that introduces you to a whole new world and inspires a change of career. Who knows...
Posted by Lia Edwards at 2:21 AM No comments:

Having relocated to within an hour of the Alps, it seems somewhat apt to share this particularly Alpine breakfast with you. Bircher muesli was invented by Dr Maxmillian Bircher-Benner with the aim of getting people to eat an apple a day. My version is by no means faithful to the original recipe, but employs the same technique of mixing a bunch of oats, nuts, seeds, fruit and yoghurt together and leaving it overnight to turn into a plump, yummy and altogether healthy start to the day.

Ingredients:
1 cup oats
1 cup mixed nuts and seed (e.g. I used pumpkin seeds, chopped walnut and chopped almonds)
1 apple or pear, peeled, cored and grated
½ cup frozen or fresh mixed berries
1 cup natural yoghurt (pro-biotic is great for you)
2 tbs agave nectar or honey
1/3 cup milk (I use oat milk)
Mix all the ingredients together in a bowl, cover with clingfilm and leave overnight. Lasts for 2 days kept in the fridge (or less in my house, where I have been known to have it for lunch or a late-night snack). 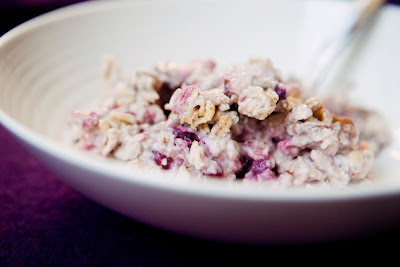 Posted by Lia Edwards at 1:14 AM No comments:

Lia Edwards
I’m Lia, photographer and designer. This blog is about the little things that add up to a creative, healthy and happy life. Please leave a comment if you see something you like!