I've been wanting to post a guilt-free chocolate cake recipe here for a while and, though I was a little sceptical of trying the beetroot/chocolate combi at first, I was surprised how delicious (and naughty) these tasted. Especially straight from the oven. Now I won't claim that this is a recipe you can throw together in a 2 minutes and whack in the oven. I did end up using a few bowls and making a bit of a mess, but I think it was worth it.

As with my previous baking recipes (see my banana loaf and apple & pear cake), I use agave syrup/nectar instead of sugar, olive oil instead of butter and wholegrain spelt flour instead of wheat flour to make these "guilt-free". So it's a good one for sneakily getting some fibre and iron into unsuspecting children (or chocoholic adults) without the accompanying refined sugar, wheat and butter.

Note on beetroots: I used pre-cooked beetroots (my husband bought them by mistake when I wanted raw ones to juice), but if you have fresh beetroots, you'll need to roast or boil them until they are soft (about an hour), then remove the skins before you puree them. I recommend wearing some protective gloves when handling the beetroot so you don't stain your hands red. 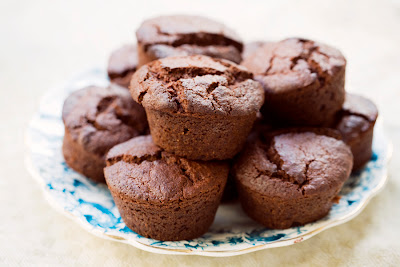 2. Puree the beetroot in a blender or food mixer (or mash very well), put into a heatproof bowl along with the chopped chocolate and heat in the oven for a couple of minutes until the chocolate has melted. Stir, then add the grated ginger and leave to one side to cool.

3. Mix the flour, baking powder and salt in a large bowl.

4. Separate the eggs (saving both yolks and whites). Whisk the egg whites until stiff.

5. When the chocolate beetroot mixture has cooled, add the egg yolks, oil and agave nectar to the mixture and and stir well. Then gently stir this mixture into the bowl of flour. Lastly fold in the egg whites and then divide between the muffin holes (around two large heaped tablespoons of batter per hole).

6. Bake on the middle shelf of the oven for around 30 minutes (turning the tray half way through), until a skewer comes out clean but making sure the tops do not burn.

Variations: You could also make this into one cake (just adjust the cooking time to around 45-50 minutes), and/or to up the chocolate factor and add some texture, you could add in some dark chocolate chips at stage 5 along with the chocolate mixture. 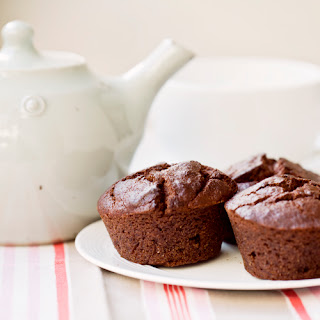 These are the works I recently displayed at Provisorium in Munich. They also tie in with Creative Every Day's March theme of "Mixed Media".

I have called this series "Pretty Ordinary" and it is based around the idea I had of photographing ordinary things on the street - peeling paint, rust, cracks in the pavement, things that you wouldn't normally even notice -  seeing what the shapes and lines inspire in my imagination and then drawing and/or painting directly on the printed photographic images to bring those ideas to life. In other words, to make something pretty from something very ordinary.

It's a new way of working for me, quite experimental and fun. Sometimes an idea works well, other times less well (lots ended up in the bin!), but that's all part of the process.

What's interesting is how each of us might see something different in these patterns. What we see is shaped by our own experiences and interests. Anyone can try this technique. Just print your photo on matt photo paper, pull out any art materials you have to hand and let your imagination take over!

Here are the "before" and "after" images (sometimes an image is rotated before being illustrated on): 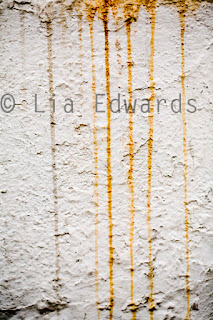 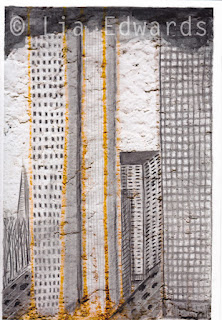 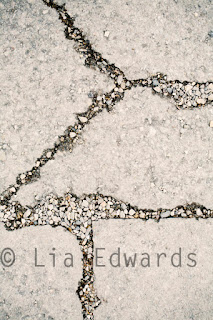 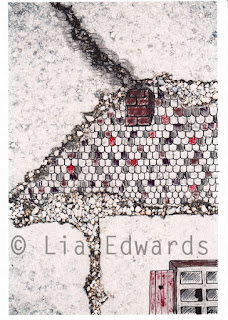 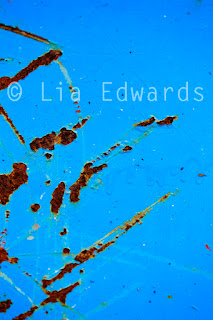 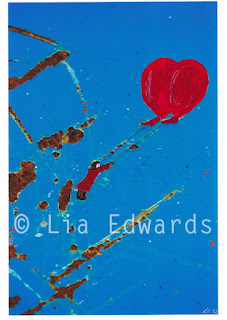 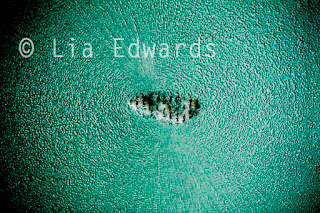 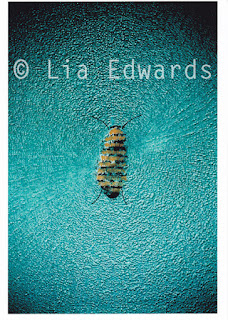 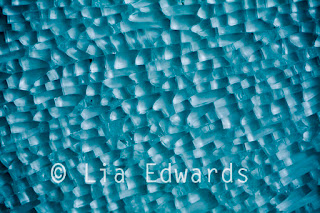 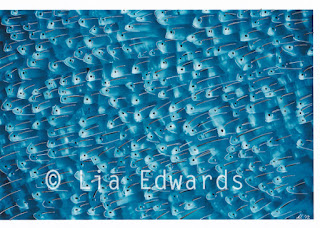 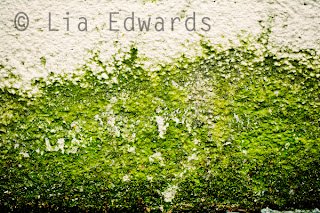 Each piece is a one-off original on photo rag archival paper, size 20x30cm. If you are interesting in purchasing one of the available works, just drop me a line at liaedwardsphotography@gmail.com for more details.

Last week I took a trip to Munich's botanical gardens for my illustration course exercise around the theme "Exotic", where I made some pencil sketches of some flowers and plants. This week I did some more work on a couple of the sketches.

For this one, I went over my pencil lines in pen for a bolder outline and provided more shading with the pen and using photographs I had taken as a reference for where the shadows fell. 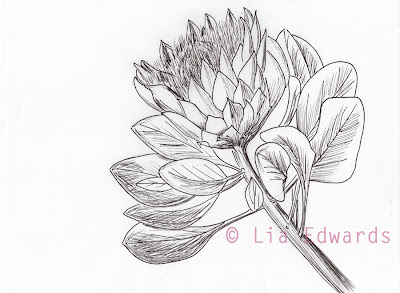 For the second one, I did the same, going over the pencil lines in pen, but then I then I used gouache paint to add some colour and depth to the image. The nice thing about gouache is that you can use it in various strengths from very thick to get strong colours right through to a very watery wash, as I did with the background here. 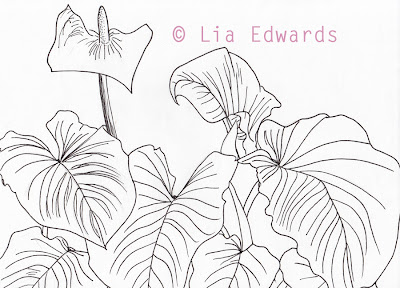 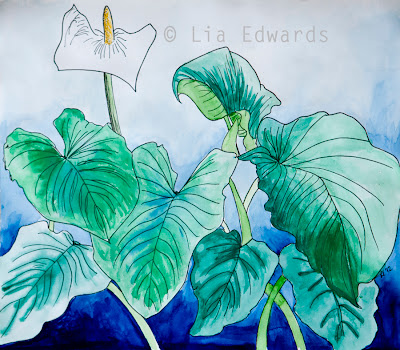 In this post, I've combined Exercises 5 and 6 of the course. Exercise 5 is about turning words into pictures and involved taking one of the specified words (I chose "Exotic" from the list) and sketching as much as possible around this theme. Exercise 6, then involved taking the same word and creating an inspiration board around that word from pictures in magazines, fabrics, textures. I thought it would make sense to effectively do both of these exercises together.

First, I did a spider diagram around the word "Exotic" (fig. 1).

The spider diagram threw up a lot of possibilities, but I decided to focus on exotic flowers and plants. I had a go at sketching things around this theme with no reference, just from my imagination and memory (fig. 2 and fig. 3).  The aim here wasn't to produce some beautiful drawings, but rather to translate into picture form some of the words from the spider diagram.  I'm not a big fan of pastels, but there were quick to work with and meant I could colour large areas quickly, even if the result wasn't really my style.

To get a look at the real thing, I decided to make a visit to the Munich Botanical Gardens, where I made some sketches (fig. 4 and 5) and photographs (fig. 6 and 7):


Finally I went through fashion and interiors magazines, the Bridgeman on-line library and some of my own reference books, and used those materials as well as some of my own photographs from the botanical gardens to put together this colourful inspiration board (fig. 8).

I was really interested to see with these exercises how I would get from words to pictures. As an ex-lawyer, I tend to find words easier than pictures. I found it particularly difficult to try and sketch ideas from memory, but was surprised once I got thinking, how I could visualise some exotic flowers and leaves from memory, even if I wasn't that impressed with my sketches of them. It was also good to go to the botanical gardens to draw the real thing and get some more drawing practice (although this did take way longer than the initial "memory" sketches. Drawing from memory is something I need to practice more, but that's something that should improve as my general drawing skills progress.

My favourite part of this exercise was pulling together all these different reference materials into my inspiration board. I can definitely see how having this up in front of me as I work, would inspire me to get painting and drawing around the theme "exotic". Who knows, this may even inspire a fabric design along this theme...

Spring is almost here, but there's still a little nip in the air here in Munich. This warming bowl of veggie goodness is just the kind of thing I want to eat right now. It's based on Jamie Oliver's recipe but with a few ingredient changes based on what I had to hand (and minus the meat). That's the thing about minestrone. You can pretty much adjust it to what you have available/what's in season. And you can feel all virtuous about all those veggies you're eating! 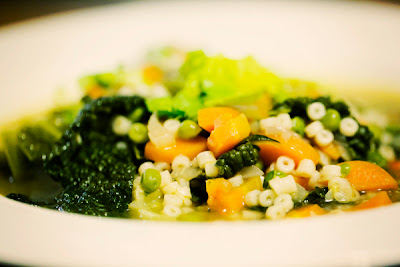 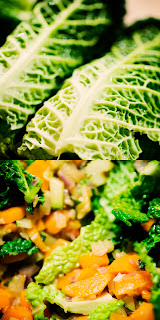 1. Finely slice your garlic, carrots, onion and celery and cook in a very large pan on a medium heat with a few glugs of sunflower oil for around 5 minutes.
2. Finely slice the courgette and add this to pan, stir everything up and cook for another 3-4 minutes.
3. Chop the tomato and cabbage (or other greens) and add to the pan, along with the peas, give it all a stir and add the stock.
4. Bring the stock to the boil, then add the pasta and cook for around 10 minutes.
5. Season to taste and serve with the reserved celery leaves (or parsley would be good too), and some crusty bread. Jamie also recommends topping with pesto, which I didn't get to try, but that sounds like a fantastic idea!

Lia Edwards
I’m Lia, photographer and designer. This blog is about the little things that add up to a creative, healthy and happy life. Please leave a comment if you see something you like!